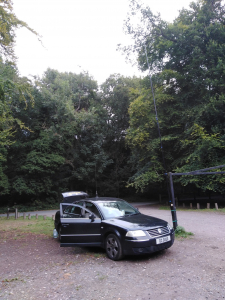 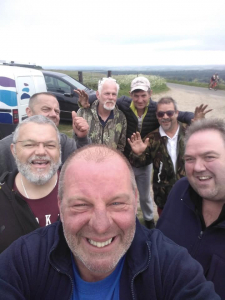 Hello all, my name is Doug, or as some call me, Dougie Fresh! Some call me worse than that, but I shall not go into that now! My first ever experience with two-way radio of any sort was when I was around ten years old, so this was around 1978/79. My parents had split up, and every other weekend, I used to spend time with my Dad at his place on the council estate in Farnham Surrey.

We used to go walking on the common quite a lot as it was cheap, I suppose, he wasn’t a big earner. Anyhow one weekend, he had got himself a CB Walkie Talkie and said he’d try it out on the common. I was aware of CB probably due to the film Convoy that I’d watched quite a few times as my Step Mum worked in a video rental shop (remember them?). So there we were walking along the top track when he turned the handheld radio on, and it gave out that non squelched hiss that AM radios did back then.

He selected the 1-4 channel and put a call out in his broad Mancunian accent. “1-4 for copy”, he called out, and next thing, someone’s come back to him! I was amazed as he did something or tried, and they weren’t usually successful! He had a brief conversation with a fella from the Estate, and that is where it started!
With my newfound knowledge, I went back to my Mum and Step Dads and pestered them for a CB! I can’t quite remember how it came about, but I was given a Vice President Roy, which was linked up to a red Firestick with a white tip on a biscuit tin in the attic! I had learnt about SWR from one of my Step Dads mates Randy Gardiner who was heavily into his radio.

Suddenly I was on the air from the little village we lived in called Normandy just outside of Guildford. There weren’t many people I could contact, but I listened to that radio religiously after school, flicking up and down through the channels!

Fast forward about 30 years to 2011/2; I was speaking to my half brother Michael from Manchester (Dads first wife’s offspring, one of three) about CB. I said I’d like to give it a try again but soon forgot about it. A few weeks later I get a parcel delivered, opened it up and there it was, a Harrier CBX sent down by my brother! No microphone, no power lead, just the radio!

I searched the internet and found a radio shop called Thunderpole, ordered a two-pin power lead, a standard four-pin microphone to suit and a magnetic-based tank whip altogether, setting me back probably about £40? Then before I used it, I ordered an SWR meter and a patch lead, quite inexpensive but something I needed. I fitted it into my Renault Safrane I had at the time but stupidly didn’t think really as the tank whip wasn’t something I could use mobile, but that didn’t stop me from trying it out when parked up at Newlands Corner, a high spot near to Guildford where I live now. I made a few contacts and met a lad from Guildford through it, but after a while, I scrapped the Renault, leaving the power lead behind, and it got put back in the cupboard.

Any spare time I had after this was consumed with Banger racing, something I did for quite a bit in my youth, and both my boys were interested, so a lot of time and money was poured into that. I had a Hiab truck, a yard full of cars and two enthusiastic lads! Time goes by, and their independence shone through, leaving Dad on his own with it all! They continued racing, but circumstances changed, so I sold the lorry, gave up the yard and had more time on my hands, so the radio came back out!

New power lead a Sirio 145, and I was back in business! This was in 2017; I had been a regular breaker on the Southern and South Coast Net, which was run on a Thursday on 39 UKFM by a chap called Ray CT 2290 Ashdown Forest based in Sussex. After a while, they changed the format to include a sideband portion of the net on 39 mids USB run by the now fully licensed Tim G5TM (CT 2116). I purchased a President Grant 2 at the time; I never realised that AM and SSB had been legalised. Moving on, I made some friends on the Southern net, and one in particular guy was Kevin Drummer Boy CT 2427 from Dorking.

I was aware of him from Banger racing as he used to race too, but a few years before I did. One night in January 2018, I said to him do you fancy having a go at running a net on AM with me. He agreed, so we chose Tuesday evenings as back then, there were plenty of nets to choose from. Mondays was PMR night, Wednesdays The Eastern Counties net, Thursday the Southern and Sundays was Sids net and the DR net. Three and a half years later, we are still going of some sort of fashion, only monthly during the skip conditions and was weekly during the winter.

I have made some good distance contacts on 11 m, Brazil on 27.620 USB, being the furthest at 5870 miles as the crow flies! I met a lot of good people through this and formed some strong relationships of which I will never forget. Our Awesome Dave is a good man and has taken what we had based and set up as a group to another level with the G8AMC.

Everything progresses as so have a lot of the radio operators I’ve had the pleasure of being able to call friends. Since back then, we have 4 members from the CB AMC (alpha mike crew) that have gone from CB to the full licence. I have resisted the dark side so far but will never say never!

I know that in this club, I’m in the right hands if I need to progress! Hopefully, I haven’t bored you all to death, and who knows, I may catch you on air in the future! All the best guys take it easy Doug AMC 2537 or club sign 444 for DX, even though in practice, triple 4 doesn’t work with foreigners!!